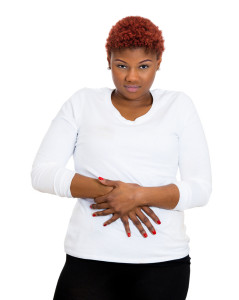 Gastroesophageal reflux disease (reflux, GERD) occurs when the stomach’s acidic liquid contents “backflow” upward into the esophagus, towards the mouth and throat. This usually occurs due to either slowed propulsion of food through the GI tract (slow motility), or failure of the lower esophageal sphincter (LES) muscle to act as a valve preventing backward flow from the stomach to the esophagus. While usually infrequent and mild, GERD may cause inflammation of the lining of the lower esophagus (esophagitis) in some, possibly leading to a pre-cancerous condition called Barrett esophagus.

Symptoms of reflux include heartburn, food regurgitating upwards, nausea, vomiting, and/or pain upon swallowing. Not uncommonly, the refluxed, partially digested food at the back of the throat aspirates into lungs/throat/mouth/sinuses, triggering (nighttime) cough and/or nasal stuffiness, wheezing/asthma, hoarseness, sore throat (especially after eating), chest pain or dental erosions. About half of patients have inflammation of the lower esophagus (esophagitis). On occasion, this inflammation can lead to scarring/narrowing of the lower esophagus (stricture) and may require dilation/opening. Reflux-induced esophagitis differs from, but may occur with, eosinophilic esophagitis due to food allergy.

While the diagnosis is often made by symptoms, it is recommended more chronic/recurrent sufferers obtain endoscopy (camera study and biopsy) of the esophagus, stomach and initial portion of the small intestine to rule out other conditions (stricture, ulcer, gastritis, more serious conditions) and to evaluate for Barrett esophagus. During the endoscopy study, the LES closing pressure is measured: treatment may vary somewhat for those with slow motility (delayed gastric emptying) versus a weak or abnormal LES.

Management of GERD includes non-medical recommendations made in both Western and Eastern medicines: loose weight if overweight; favor small, frequent, lower-fat meals rather than large meals; avoid laying supine for at least 3-4 hours after meals; take only liquids by mouth for 4 hours before bed; elevate the head of the bed on blocks 8 inches; and avoid bending/stooping after meals. Since reflux occurs when the LES opens up/loosens, foods/agents that open/loosen the LES muscle should be avoided – especially alcohol, caffeine, nicotine, chocolate and peppermint. Acidic foods, like citrus and tomato products also should be avoided. Eastern medicine has an additional concept of easily digested foods, which loosely correlates to “low residue foods” in the West (but includes fiber from all cooked vegetables and legumes); these should be favored to prevent taxing the digestive system. Certain medications, especially progesterone, nitrates, anticholinergics (like those for bladder spasm), anti-hypertensives (calcium channel blockers like Norvasc) and those for asthma (albuterol) can all also relax the LES and cause reflux.

Pharmaceuticals for GERD are well known to most and available over the counter: antacids (TUMS, Rolaids), H2 antagonists (Zantac, Tagamet, etc), proton pump inhibitors (Pepcid, Prevacid, Nexium), and occasionally agents that increase gut motility to move food along (used less today). For some patients with severe disease and/or Barrett esophagus, surgical treatment may be an option.[1]